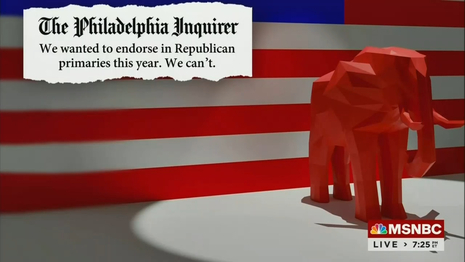 On Saturday, Hot Air’s weekend editor Jazz Shaw reported on left-wing Pennsylvania paper, The Philadelphia Inquirer, refusing to endorse any Republican candidates ahead of Tuesday’s primary election: “They are publishing their picks for the Democratic races as they normally do. But instead of listing endorsements for candidates in Republican primary races in Pennsylvania this week, the editorial board of the Inquirer decided to publish a long-winded explanation of why they refused to endorse a single GOP candidate in any race.”

“The board begins with what could be seen as a refreshing bit of honesty. They write, ‘It is no secret that this board, for decades, has leaned toward Democrats.’ Really? We never could have guessed,” Shaw sarcastically noted. He observed: “There was a time back in the day when newspapers actually made an effort to deliver real news and facts to the public, leaving the reader to make up their own mind on the issues….That’s no longer the case. The board should take a moment and remember that their views are not ‘facts’ with opposing viewpoints being ‘wrong.’”

How 40 years of laws and restrictions lessened abortion access in Ohio: Capitol Letter

Acura dominates with 1-2 finish at Mid-Ohio

Fact Checkers POUNCE: ‘The US Still Exists,’ Biden Didn’t End Us as…

Beyonce Ties Grammys Record, Misses Her Own Award, Shows Up In Time To Break The Record

McConnell Torches Biden Over Chinese Spy Balloon: An ‘Embarrassment That Just Played Out

Zanesville News
Prev Next 1 of 955