Reid LOSES IT Over SCOTUS Striking Down Biden Vaccine Mandate 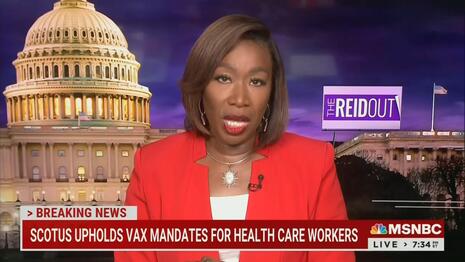 MSNBC’s ReidOut host Joy Reid was not happy with the Supreme Court’s decision to strike down President Biden’s vaccine employee mandate on Thursday, arguing that the Supreme Court was “siding with the virus” and that the six Republican-appointed justices are right-wing ideologues, among other vile personal attacks.

As previously mentioned, Crazy Joy led off the unhinged segment declaring “the U.S. Supreme Court siding with the virus today by blocking the Biden administration’s rule requiring vaccine mandates for companies employing more than 100 people.”  Reid then asked both of her guests, Congressman Raul Ruiz (D-CA) and former U.S. Solicitor General Neal Katyal what they “make of the Supreme Court doing away with this mandate.”

As you can imagine, neither one of them was pleased with the Supreme Court’s decision. Both of them made very tame criticisms of the ruling compared to Reid who went off into a deranged rant claiming:

Reid then aired a clip of Biden claiming United Airlines had success with their own company-wide mandate. Reid then proceeded to level attacks on the court’s motives when addressing Katyal:

During Katyal’s commentary on the vaccine mandates, he referenced another court decision that was handed down today that dealt with veteran’s benefits which Reid was clearly not aware of. Katyal said “you know I lost another case today at the Supreme Court about veterans’ benefits. But I’m going to stay silent on that.”

As is typical of Reid being both ignorant and disrespectful of other wishes, she butted in asking for Katyal to discuss the case that he had just said he wanted to stay silent on:

REID: I have to ask you very quickly, what did they do to veterans’ benefits? Because. Very quickly?

KATYAL: It’s the social security benefits. They cut them back for a certain category of veterans today.

Predictably that decision also triggered Reid which caused her to blurt out “of course. Of course. At this point, Neal, it is hard to think of them as anything other than right-wing ideologues. They should all just have right-wing talk radio shows. Reid continued her kvetching, “they are not justices in the great tradition of Supreme Court justices. They’re just politicians. As far as I’m concerned, I see nothing about what they’re doing that I can possibly respect.”

Thankfully at least five Supreme Justices could care less about having the respect of Joy Reid. Instead, they decided to uphold the constitution and the rule of law.

Reid’s venom against the Supreme Court was made possible thanks to the endorsement of advertisers such as Applebee’s, Sleep Number, and Chase. Follow the links to see their contact information at the MRC’s Conservatives Fight Back page.

To read the transcript of this segment click “expand”:

JOY REID: We have a lot of breaking news on the COVID front, including the U.S. Supreme Court siding with the virus today by blocking the Biden administration’s rule requiring vaccine mandates for companies employing more than 100 people. But the court said a separate mandate requiring vaccinations for an estimated 20 million health care workers can be enforced. This comes the day President Biden stepped up his response to the Omicron surge. For the Omicron surge. Pledging to provide Americans with free tests and masks. He’s also sending 120 military medical personnel to six states where hospitals have been overrun by cases. Let’s bring in Congressman and Physician Raul Ruiz of California who is joining us from the Palm Spring Convention Center where he’s helping the FIND Foodbank distribute COVID-19 antigen tests. Also with us is former acting U.S. Solicitor General Neal Katyal. And thank you both for being here. And Congressman Ruiz I want to start with you and thank you for what you’re doing. I love that you are helping to actually get tests because that’s what people so desperately need. But just as a physician, as somebody who is out there trying to represent the people and help them, what do you make of the Supreme Court doing away with this mandate?

REP. RAUL RUIZ: You know, it doesn’t make sense. And in a public health perspective, it only hurts us. It is only good for our public’s health and for the large corporation’s businesses to keep their employees safe. And they can do so by either ensuring that they get vaccinated or that they get tested. And if they’re positive, to stay away from other individuals that can also spread the virus and cause more sick days and loss of productivity for that company. So it is a bad day for our public health efforts. But we still have some good news. The Biden administration has purchased over 500 million tests. They’re on their way to providing 300 million a month. We also have these pilot programs with the Health and Human Services and USDA that we see here where they’re taking the tests to the people, into the communities that are vulnerable. If you’re food insecure then your immune system is probably weaker and therefore you’ll get more severely sick. You also more likely live in resource-poor settings where you have lack of access, lack of space in your household to prevent from getting infected and quarantining, being able to quarantine away from other family members. And therefore this is a very high-risk vulnerable population. And I think it’s very smart. And the pilot program is working. This organization FIND Foodbank under the leadership of Deb Espinosa has already distributed 50,000 tests. Today they’re going to distribute over 800 testing kits to households right here in Palm Springs in the Coachella Valley.

REID: And God bless that and everyone involved in doing that. And you know credit where credit is due. That is actually a wonderful program and the Biden administration really deserves credit for it. You know, I mean. we’re trying to save lives here that is the end goal. You know and Neal, I have to say, I don’t have faith in the Supreme Court. I think they’re ideologues. I think they’re right-wing ideologues I think they’re sort of doing sort of a Christian Nationalist version of you know whatever it is the Supreme Court used to do. But you know, I just look at the numbers. You know, Biden talked today about United Airlines where he said — let me just listen to what he said. This is President Biden today talking about one company that benefitted from these mandates.

PRESIDENT JOE BIDEN: United Airlines was averaging one employee dying a week from COVID-19. After implementing its requirement, it’s led to 99% of its employees being vaccinated. United had 3,600 employees test positive, but zero hospitalizations. Zero deaths in over eight weeks.

REID: I mean, the administration had made an estimate that it would that the mandate would result in 22 million people getting vaccinated and prevent 250,000 hospitalizations. The usual six voted the way we would expect them to vote, the six right-wingers. At this point, Neal, have they not just simply stated by their actions that they are more in favor of right-wing politics, the kind of DeSantis style right-wing politics than they are in favor of saving lives? They don’t really care if this causes lots of people to die, clearly.

KATYAL: And I don’t say that lightly in attacking the court. I rarely do attack the court. Indeed, you know I lost another case today at the Supreme Court about veterans’ benefits. But I’m going to stay silent on that. But today’s decision on vaccines is such a grave threat to public safety. And the idea that the Supreme Court is responsible for it, it’s really hard to imagine. I mean the justices are now living in their own bubble. You know, I just argued there recently, and I can’t tell you all the COVID restrictions they had. I had to get a negative test. They barred all the…

Novak Djokovic A Great Player But “Oz Entitled To Throw Him Out”: Shane Warne

ABC’s Muir Brags to ‘The View’: You Can Watch Fox or ‘Come to the…

Column: How Can the GOP Look Good Despite the Media?

ABC’s Muir Brags to ‘The View’: You Can Watch…

Zanesville News
Prev Next 1 of 204