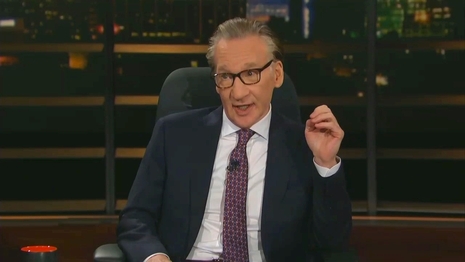 On Friday night’s Real Time with Bill Maher, the HBO host lamented the so-called “Disinformation Governance Board” within the Department of Homeland Security and suggested its leader Nina Jankowicz is not a “bright person.”

This is where the contrarian/libertarian piece of Maher’s personality comes out, as opposed to the Occupy Wall Street socialist piece.

“People are calling this the Ministry of Truth, Maher said, adding he doesn’t even like the “creepy” name of “homeland security,” but we got used to it. “Now they’ve got an even creepier one. ‘Disinformation Governance Board.’ Yes, they’re right to compare this to Orwell in the Ministry of Truth. That’s exactly what it sounds like.”

He said he was fine with a mission of fighting off Russian misinformation, or fighting human trafficking, but there was a slippery slope.

“Here’s from the Department of Homeland Security. Disinformation is defined as ‘false information that is deliberately spread with the intention to deceive or mislead.’ Well, you could have said that about ‘If you like your doctor, you can keep your doctor,’” Maher said, referring to Barack Obama’s definitive policy lie. Of course, Maher gave $1 million toward Obama’s re-election, so he was never that upset. He’s just talking to his liberal friends here.

Maher continued: “It said also, here’s a phrase, ‘can take many forms.’ Okay, now we’re going faster down the slippery slope, ‘including but not limited to’ the two I mentioned, okay. So — government should not be involved in deciding what’s true or not true! Because a lot of people are saying and my follow-up question would be, ‘Who do you think the truth czar is going to be in 2025?”

After former Rep. Jane Harman said it shouldn’t be like the House Un-American Activities Committee, which was somehow an “old Richard Nixon thing,” Maher added. “To bring it back to Twitter, the czar Nina Jankowicz says she’d like some committee there within this governing board with the power to quote, ‘edit Twitter and add context.’ Oh, you mean like what Twitter is? That’s what Twitter is. Somebody says something, then you add context! These are not bright people in our government.”

Finland and Sweden want to join NATO. Here’s how it works and what comes next

CNN+ Was More of a DISASTER Than You Knew: As Little as 5000 Viewers at ‘Any…

Is This a Joke? Todd Turns to Sharpton for Comment on Racist Violence

Vox Writer In A Panic Over ‘Censorship’ Law Ruling

Zanesville News
Prev Next 1 of 667