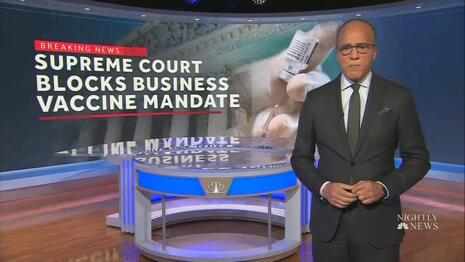 Hours after the United States Supreme Court struck down the Biden administration’s COVID vaccine mandate for businesses with over 100 employees, the evening news broadcasts went into meltdown mode.

Leading off her broadcast, CBS Evening News anchor Norah O’Donnell in a very somber tone announced that “tonight a blow to the Biden administration as COVID cases careen out of control across the U.S. The Supreme Court blocking the President’s plan to require employees at large private companies to be vaccinated or test weekly for COVID.”

She of course ended with some positive spin for the Biden administration exclaiming “the court is allowing the mandate for most healthcare workers!”

In a blow to the White House, the Supreme Court blocking the Biden administration from enforcing a vaccine and testing mandate for large businesses. The policy, which would have impacted more than 80 million employees, required they get vaccinated or wear masks and undergo weekly testing.

While anchor David Muir in response to Bruce’s reporting appeared to advocate for the vaccine mandate by recalling how United Airlines apparently had a drop-off in COVID cases after they enacted the mandate.

Over on NBC Nightly News, anchor Lester Holt apparently received the same talking points as ABC and CBS. He opened his show by bemoaning “a big blow to the White House COVID strategy.” Following that open, Holt continued to whine “it’s a decision impacting more than 80 million workers. But the court also leaving intact a separate vaccine mandate for most of the nation’s health care workers.”

I will never understand why people like Lester Holt, who I would be willing to bet is vaccinated, would care if someone else is vaccinated or not. This is a personal medical decision that is nobody else’s business. The leftist media should find something else to complain about.

This incredibly biased segment was brought to you by Verizon (ABC), Prevagen (CBS), & Liberty Mutual (NBC). Their information is linked so you can let them know about the biased news they fund.

To read the relevant transcripts of these segments click “expand”:

NORAH O’DONNELL: We start tonight with some very significant decisions by the U.S. Supreme Court. A mixed pair of rulings that will directly impact nearly 100 million Americans. The court’s conservative majority says the Biden administration does not have the authority to impose a vaccine or test rule on private companies, but it does have the ability to mandate COVID shots for most health workers. President Biden says he was disappointed by the decision to block “common-sense requirements for large businesses” but that keeping the rule for doctors nurses and others who work in settings that receive federal aid will save lives. The decisions come as the U.S. Is facing a surge in new cases and record hospitalizations. As we come on the air, nearly 63% of Americans are fully vaccinated.

O’DONNELL: Tonight a blow to the Biden administration as COVID cases careen out of control across the U.S. The Supreme Court blocking the President’s plan to require employees at large private companies to be vaccinated or test weekly for COVID. But the court is allowing the mandate for most healthcare workers, this comes as the President called in the military today to help overwhelmed hospitals in six states survive the surge.

MARY BRUCE: Tonight, in a blow to the White House, the Supreme Court blocking the Biden administration from enforcing a vaccine and testing mandate for large businesses. The policy, which would have impacted more than 80 million employees, required they get vaccinated or wear masks and undergo weekly testing. The conservative justices argued the agency overseeing the mandate, the Occupational Safety and Health Administration, also known as OSHA, does not have the authority to regulate public health.

JUSTICE NEIL GORSUCH: OSHA has not traditionally mandated other vaccines for other hazards that could be — pose a grave risk, some might say? The flu kills people every year. Other grave diseases do, too.

BRUCE: Today, the court ruling 6-3, with liberal justices Breyer, Sotomayor, and Kagan dissenting, writing, “In the face of a still-raging pandemic, this court tells the agency charged with protecting worker safety that it may not do so in all the workplaces needed.” Many Republicans tonight are celebrating the court’s decision to halt the mandate, but the President says he is “Disappointed that the Supreme Court has chosen to block common-sense life-saving requirements for employees at large businesses that were grounded squarely in both science and the law.” But in a victory for the White House, the court is allowing a vaccine mandate for workers at federally-funded health care facilities to continue, a move which impacts more than 17 million workers. The President tonight hailing that decision, saying it will save lives and that it is now on states and employers to do the right thing. Pointing to United Airlines which says that prior to putting in place their own vaccine mandate was seeing an average of one employee dying every week from COVID. The CEO stating, “We’ve now gone eight straight weeks with zero COVID-related deaths among our vaccinated employees.”

DAVID MUIR: They say that after their own mandate at United Airlines. Let’s bring in Mary Bruce live at the White House tonight. And Mary you said it there. Tonight the President now trying to place this on the states and on individual employers  — saying the Supreme Court’s decision, quote, does not stop me from using my voice as President to advocate for employers. He said to do the right thing to protect Americans’ health and the economy.

BRUCE: David, the White House is keeping up this fight. And they do believe that despite the court’s ruling, that this mandate for large businesses encouraged millions of Americans to be vaccinated and drove large companies like United to take action on their own. And tonight, the President is urging other large businesses to step up, as well. David?

LESTER HOLT: But first a big blow to the White House COVID strategy. The U.S. Supreme Court today blocking enforcement of the President’s vaccine and testing mandates for large employers ruling the requirements go too far. It’s a decision impacting more than 80 million workers. But the court also leaving intact a separate vaccine mandate for most of the nation’s health care workers. The rulings announced as the number of fully vaccinated Americans reaches more than 208 million, close to 63% of the population.

Read More: Nets Cry About ‘A Blow to The Biden Admin’ Over SCOTUS Vaccine Decision

Movie releases, concerts and more things to do in Columbus

ABC’s Muir Brags to ‘The View’: You Can Watch Fox or ‘Come to the…

Column: How Can the GOP Look Good Despite the Media?

Diving Back In Action Thursday At IUPUI

ABC’s Muir Brags to ‘The View’: You Can Watch…

Zanesville News
Prev Next 1 of 204